My First Canvas: You Mean I Was Supposed to Paint It?

For some reason however, I was inspired to purchase canvas, some small tubes of acrylic paint and a few brushes.  Once I had everything ready and within reach, I took a starting photo: 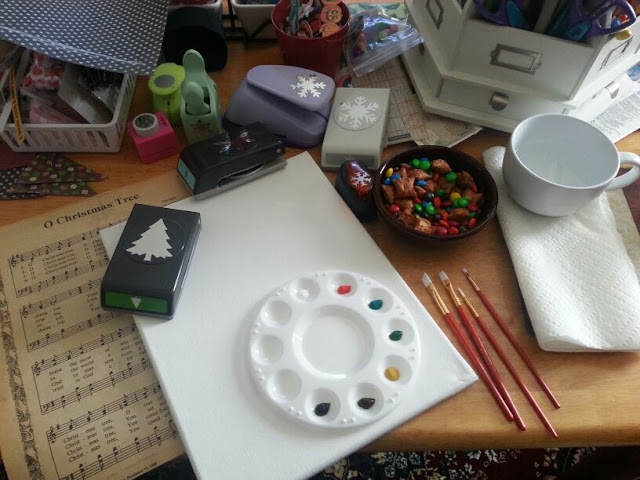 I then promptly veered off-course, and painted a layer of Mod Podge over the entire canvas and smoothed a page of "O Christmas Tree" over the top.  Black and white scrapbooking paper was within easy reach since I've been crafting some Halloween gift tags this week, so I cut out two trees and used a paper punch for a third.  Reaching across the table, I found my snowflake punches (I'm still not certain when or why I had taken them out) and used tan cardstock to make several different designs.  Eventually I used the paint, highlighting areas on the music's borders, and adding dots of color to the trees: 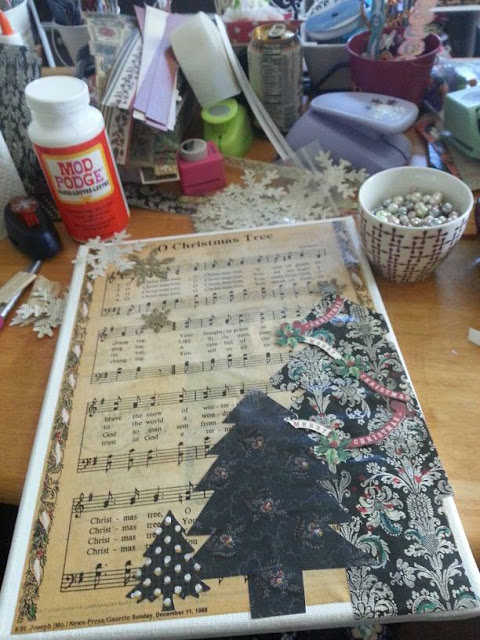 The bubbles under the sheet music worried me, but I gave myself permission to keep going, allowing that this was the first time I was using canvas.  It'll be okay, it'll be okay... and if it's not, oh well, I'll know not to do THAT again. 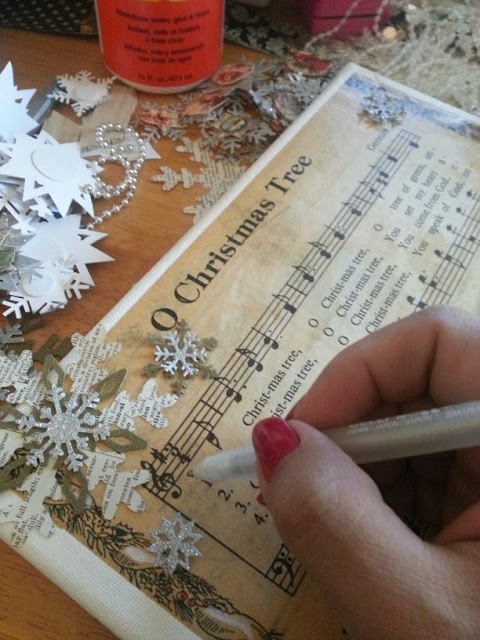 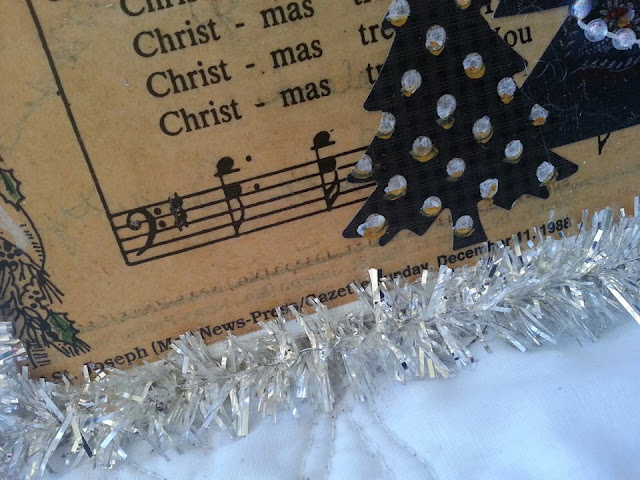 I found the sheet music in a holiday sales booklet from St. Joseph, Missouri, dated December 11, 1988.  Lookie there, my sophomore year of college.  Not wanting to lose the source information, I trimmed the canvas in silver mini-garland. 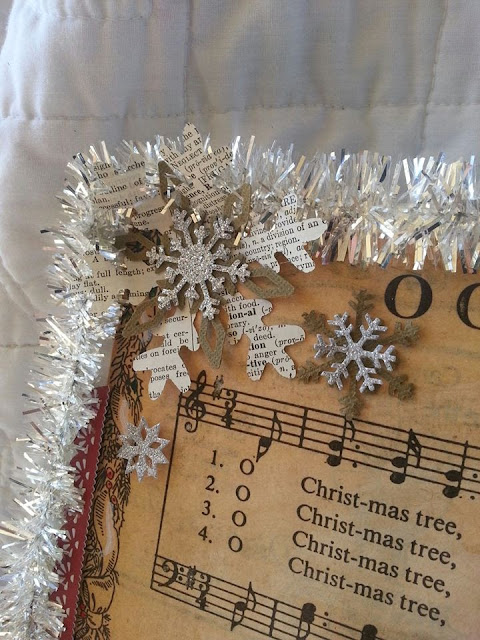 I love layering different snowflake designs on top of one another.
Can you blame me with the 100+ degree heat we've been enduring for a week now? 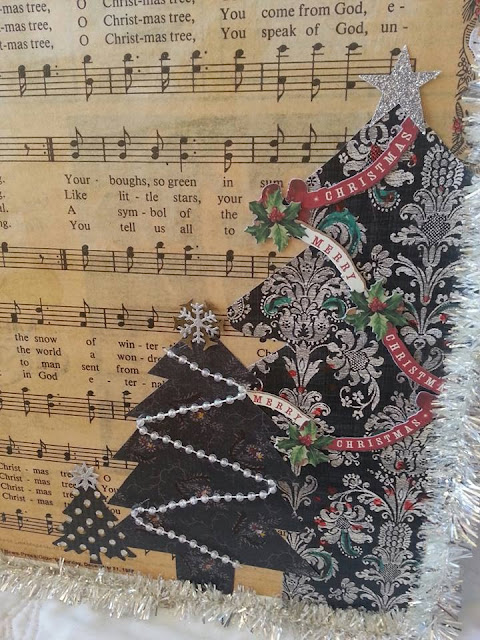 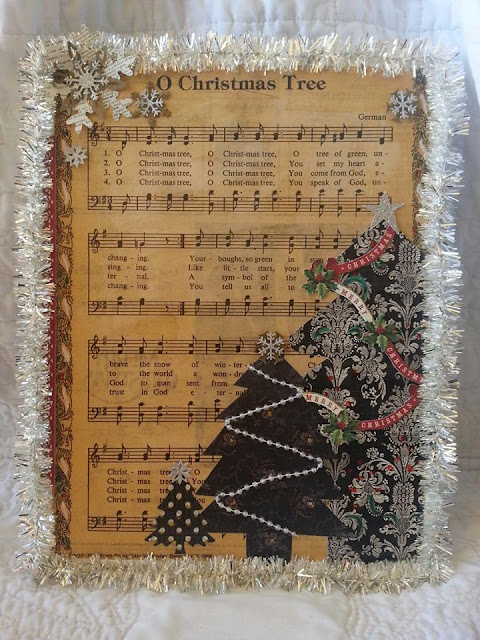 I love that the print from the back side of the sheet music is visible through the paper.  It was very thin, so thin I was worried it would tear under the pressure of me smoothing it over the canvas and topping it with more Mod Podge.

This wasn't the way that I had intended to use the canvas when I purchased it and the paints.  Really.

Sometimes you just have to go with the flow.

Being able to handle and turn the canvas while I worked was such a nice change.  Usually my papercrafting is assembled on the table top, with samples being glued into my art journal.  The Mod Podge also firmed up the canvas as it dried, so I can imagine hanging it or setting it up on a stand, tucked into a bookcase or decorating a tabletop.

Inspired, I brewed some afternoon coffee and started on another canvas (the rippled area is drying flat, believe it or not): 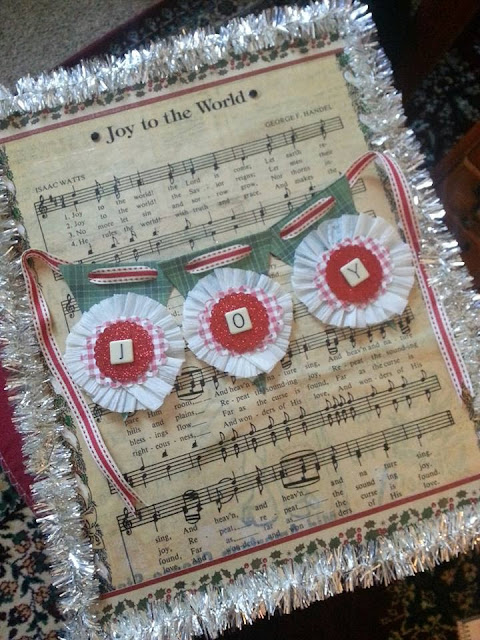 Have you ever purchased crafting supplies that you ended up using in a way other than what you had intended?