... or, more accurately, Playing WITH Dominoes: A Tutorial 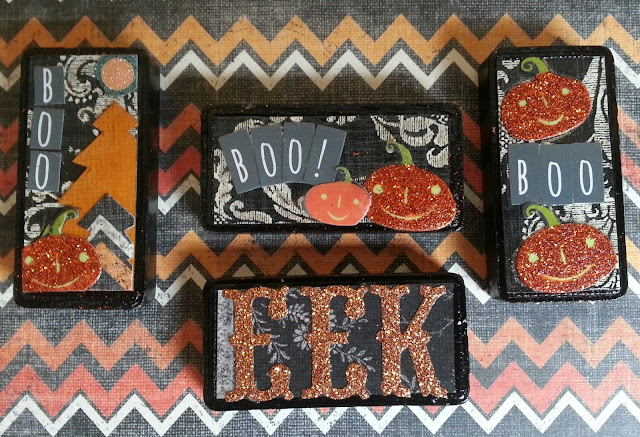 Several years ago, Sheila taught me how to alter dominoes by Mod Podging a pre-printed image onto to one side, then soldering around the edge and adding a jump ring to create a pendant.  It was the first time I had used Mod Podge or a soldering wand, and I loved each and every step.  Thanks again Sheila!

Over the next few months I added a soldering wand, adhesives, and even old dominoes to the crafty nook, but didn't use them.  Busy with buntings, adopted ancestors, ornament swaps, classroom anchor charts and crafts to compliment learning centers, the dominoes sat in a large glass bowl waiting p-a-t-i-e-n-t-l-y.

Setting my glamour girl up next to an altered art journal, there they were.  Remembering that I had scrap paper and itty bitty letter stickers still out on my work table, I thought I'd see what I could come up with.  Who knows, Halloween domino brooches could be fun! 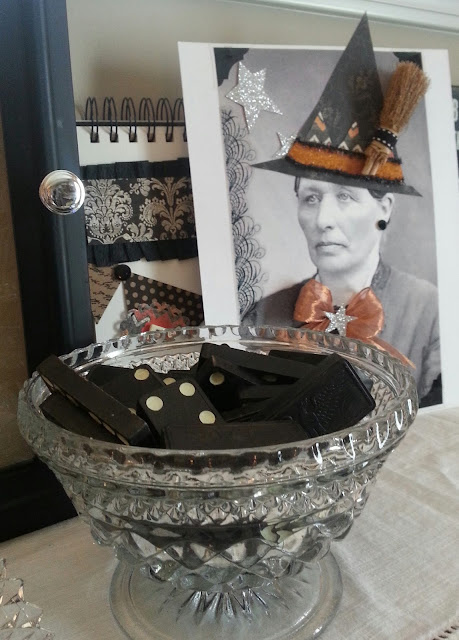 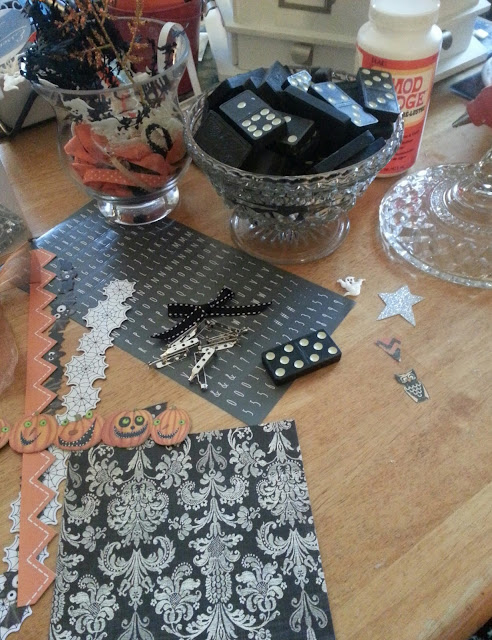 I measured a domino, leaving the outer edge as a frame, and determined how big my paper could be.  Cutting out some rectangles from black patterned scrapbook paper, I then had to decide what I wanted to layer on top.  One decorative paper had orange and black vintage looking owls printed on it, so I carefully cut some of them out, thinking they'd make nice Halloween characters.  The polka dotted paper needed some color, so out came the paints: 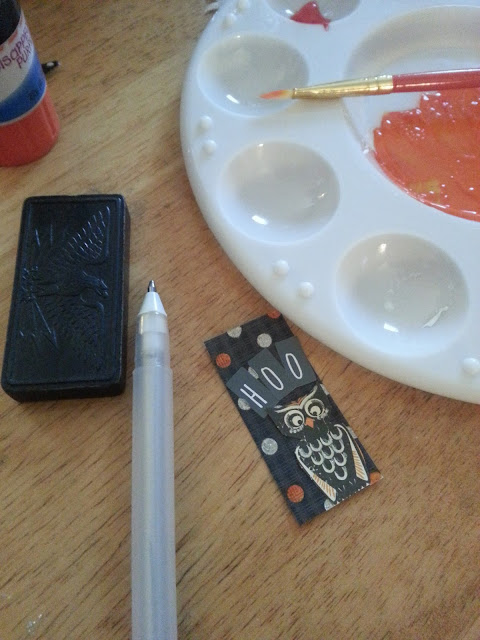 The mini-stickers were bought at Target for fifty cents last month, and they were perfect for spelling out "Hoo," "Boo" and "Haunt" to accompany the scrappy fun.

Once the collage paper pieces were done, I made sure a domino's back was clean and dry.  Then I painted a thin layer of Mod Podge onto it, making sure to coat the surface evenly: 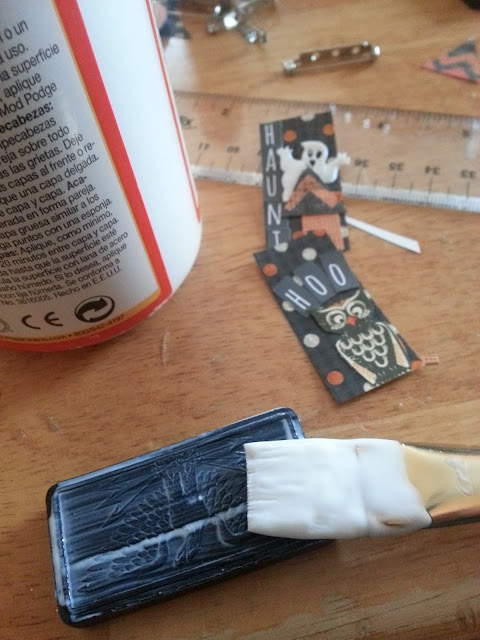 Applying the scrapbook paper into the glue, I pressed it against the domino firmly, working air bubbles out around the edges: 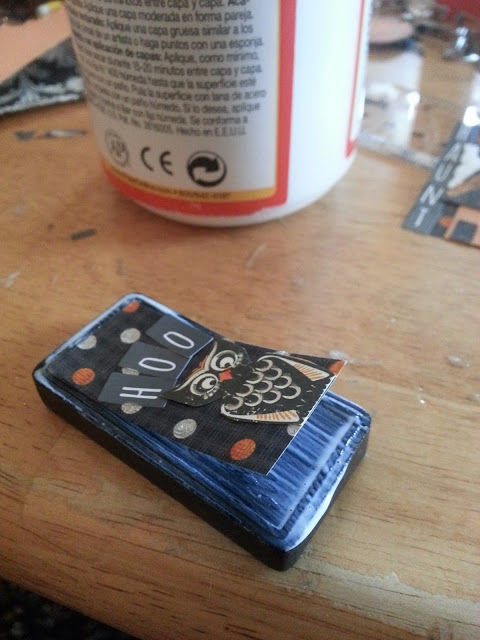 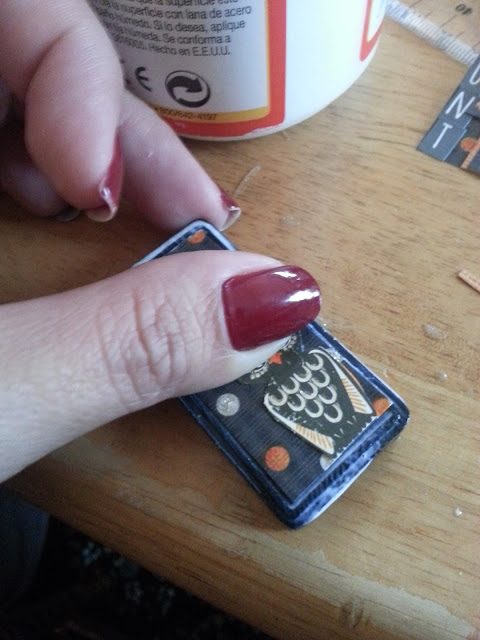 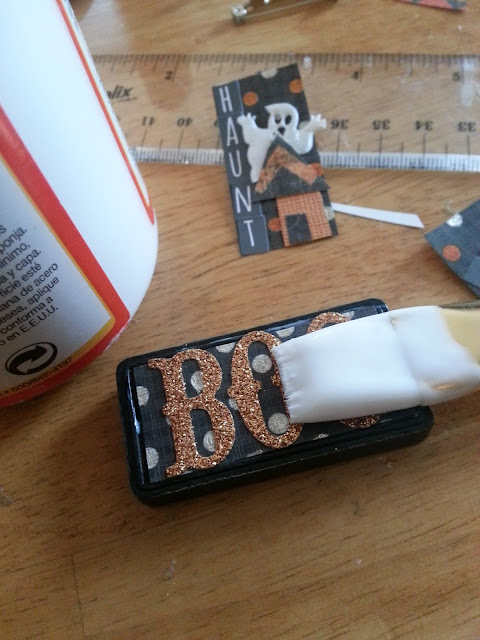 I painted another layer of Mod Podge over the top of each image to seal it to the domino (the owl photo didn't turn out, so here's a photo of my "BOO" domino).

The surfaces of the dominoes will stay tacky/sticky for a while until the Mod Podge dries, so I left the backs of most of the dominos alone, except for one that will have "Trick" on one side and "Treat" on the other, and a sassier yet-still-cute domino with "You don't know" and "Jack" with a smiling jack-o-lantern on alternating sides. 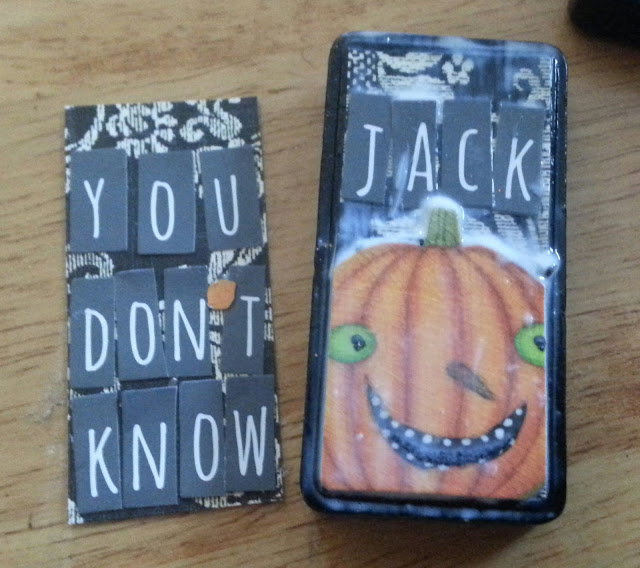 See the Mod Podge?  It's pretty much watered down white glue, but don't worry, it dries clear. 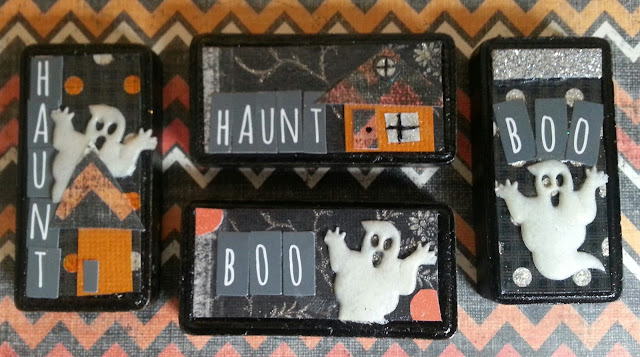 The ghosts were actually in ribbon/garland form, and slightly puffy, so they required extra smooshing and layers of Mod Podge to seal them.  Cardstock is also thicker and needs extra attention when sealing the edges.  I love that glitter paper and accents don't lose their sparkle after being coated!

My favorites are the owls:

What Halloween goodies are you working on?