Watch Me Pull a Rabbit...

(Oh look, I need to vacuum those out when I get the chance, *cough cough*.) 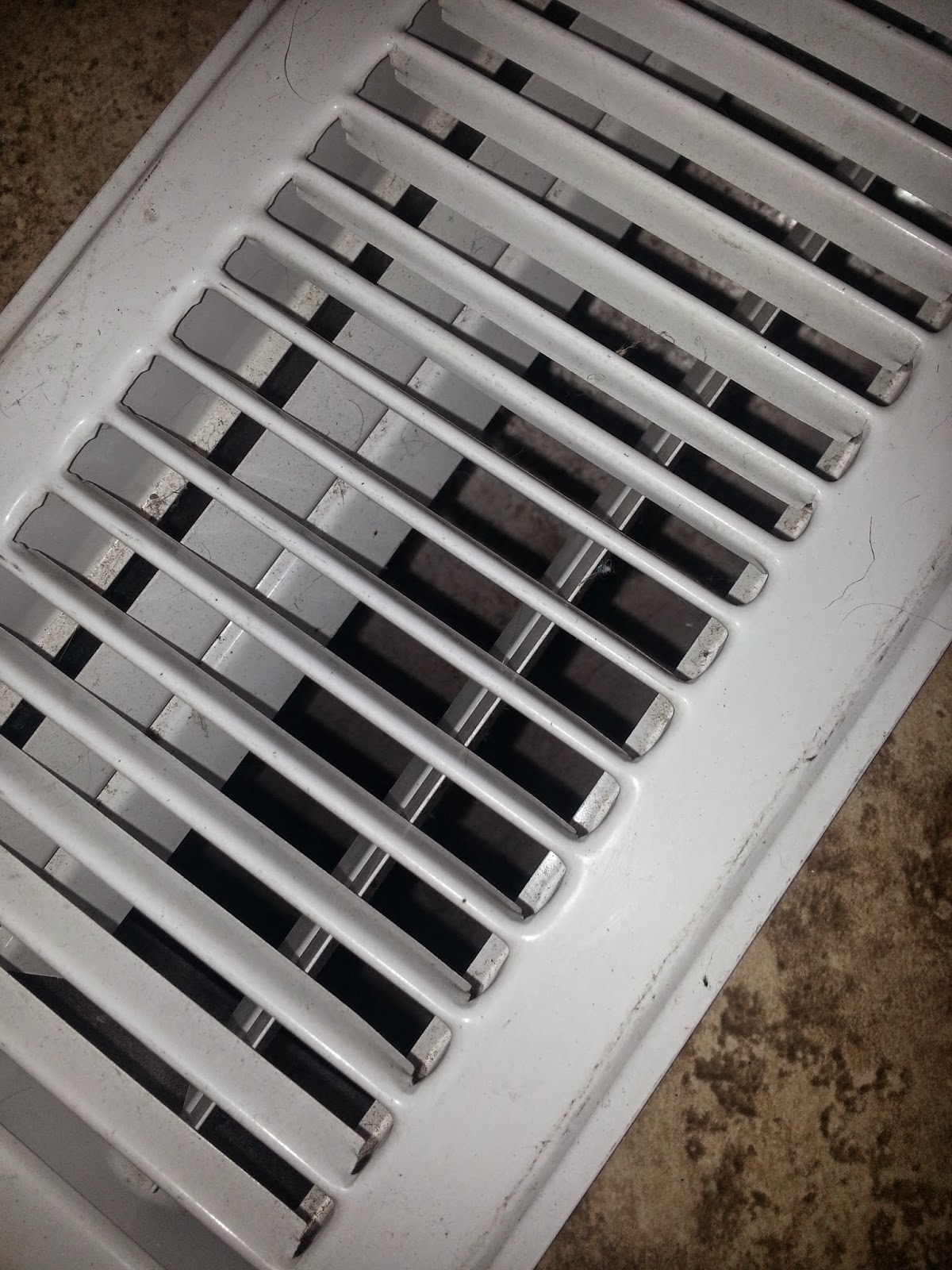 ... and waited (the Almost Third Grader was able to patiently wait for five minutes before returning to play video games downstairs): 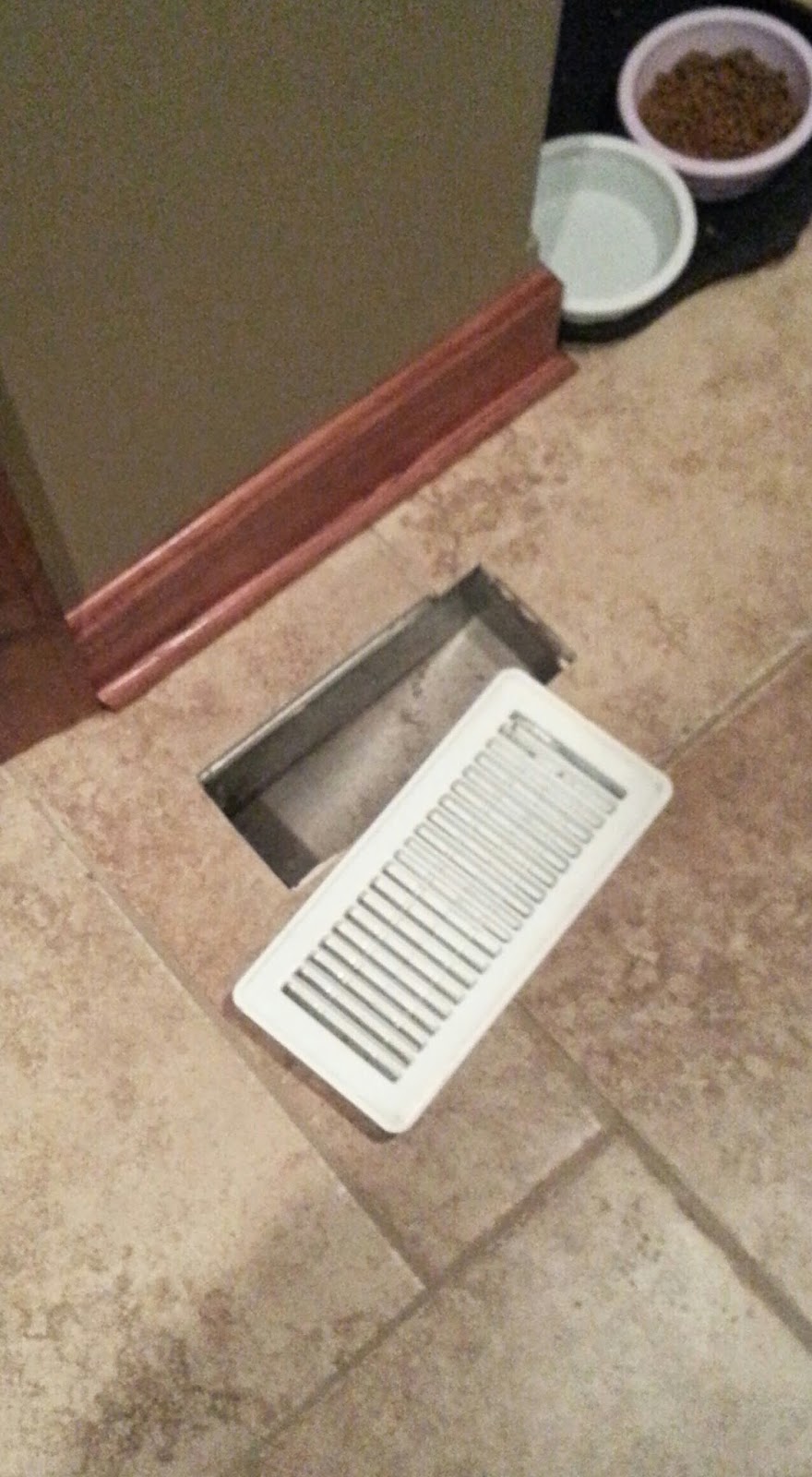 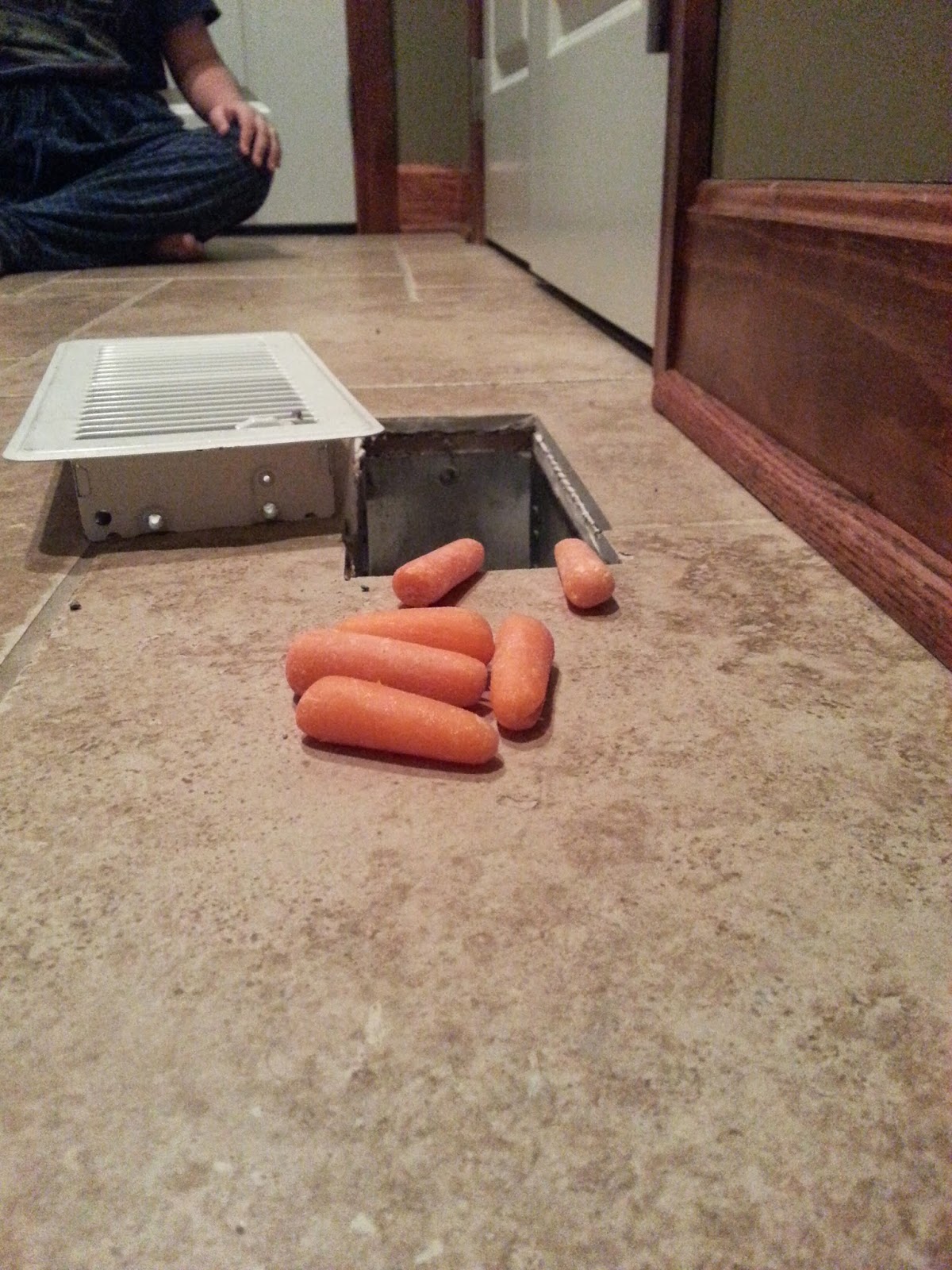 Baby carrots apparently don't have the appeal to bunnies that I thought they did.

Tired of waiting, I turned on the air conditioner.  Four minutes later, I heard a telltale scrittety-scratch that let me know our guest was ready to remove himself from the wind tunnel. 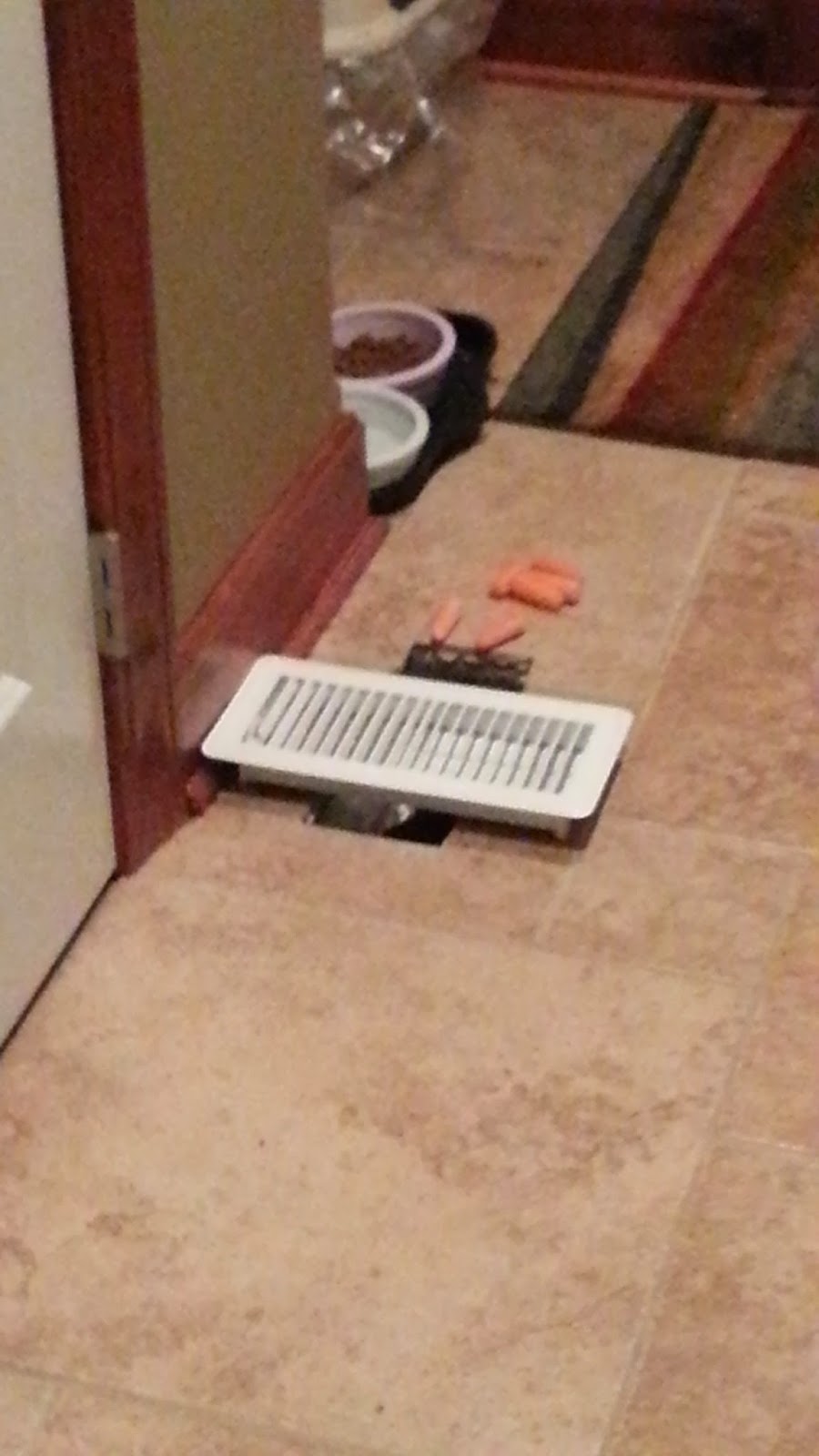 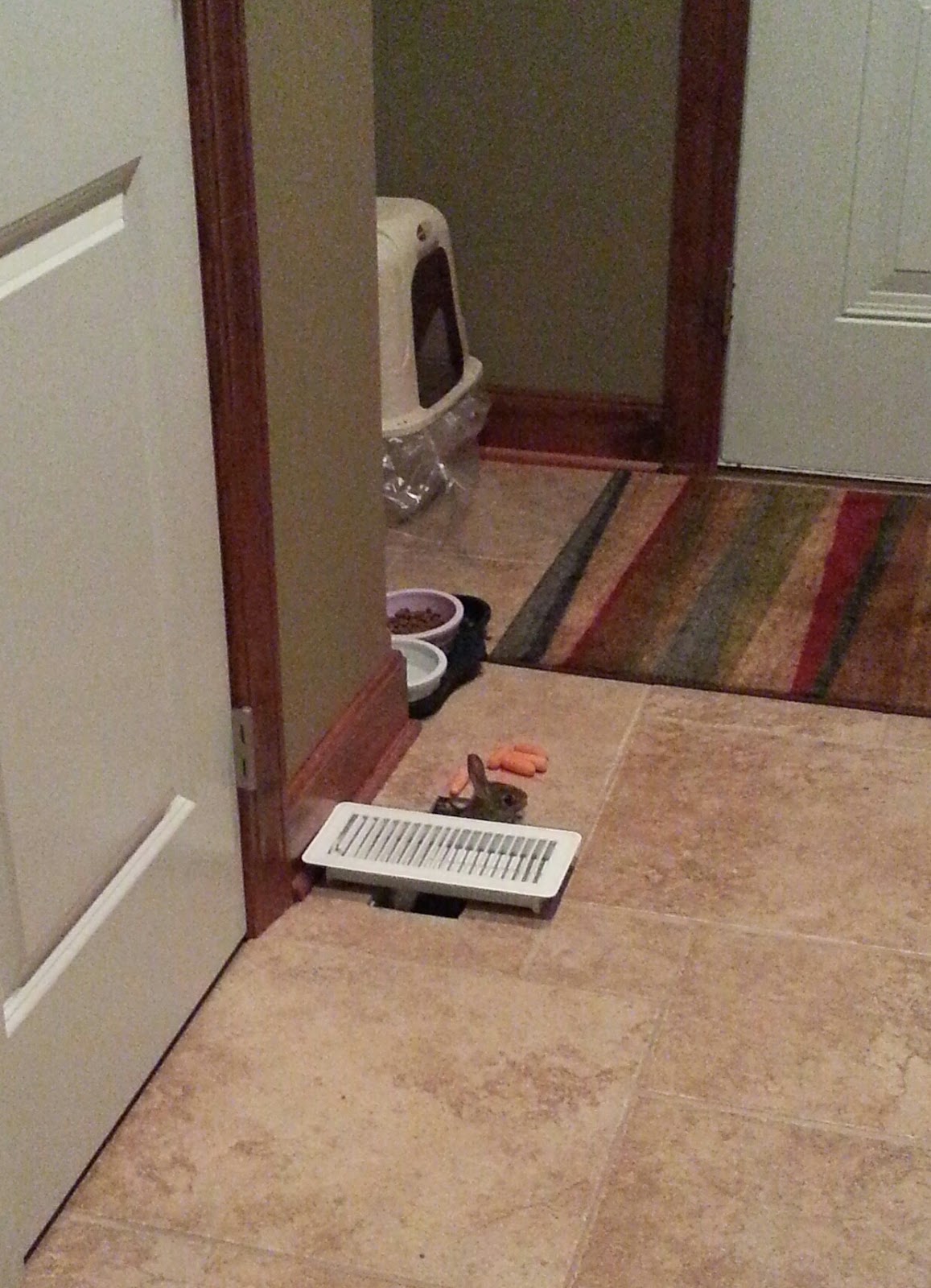 This time Fuzzy-buns and I both waited. 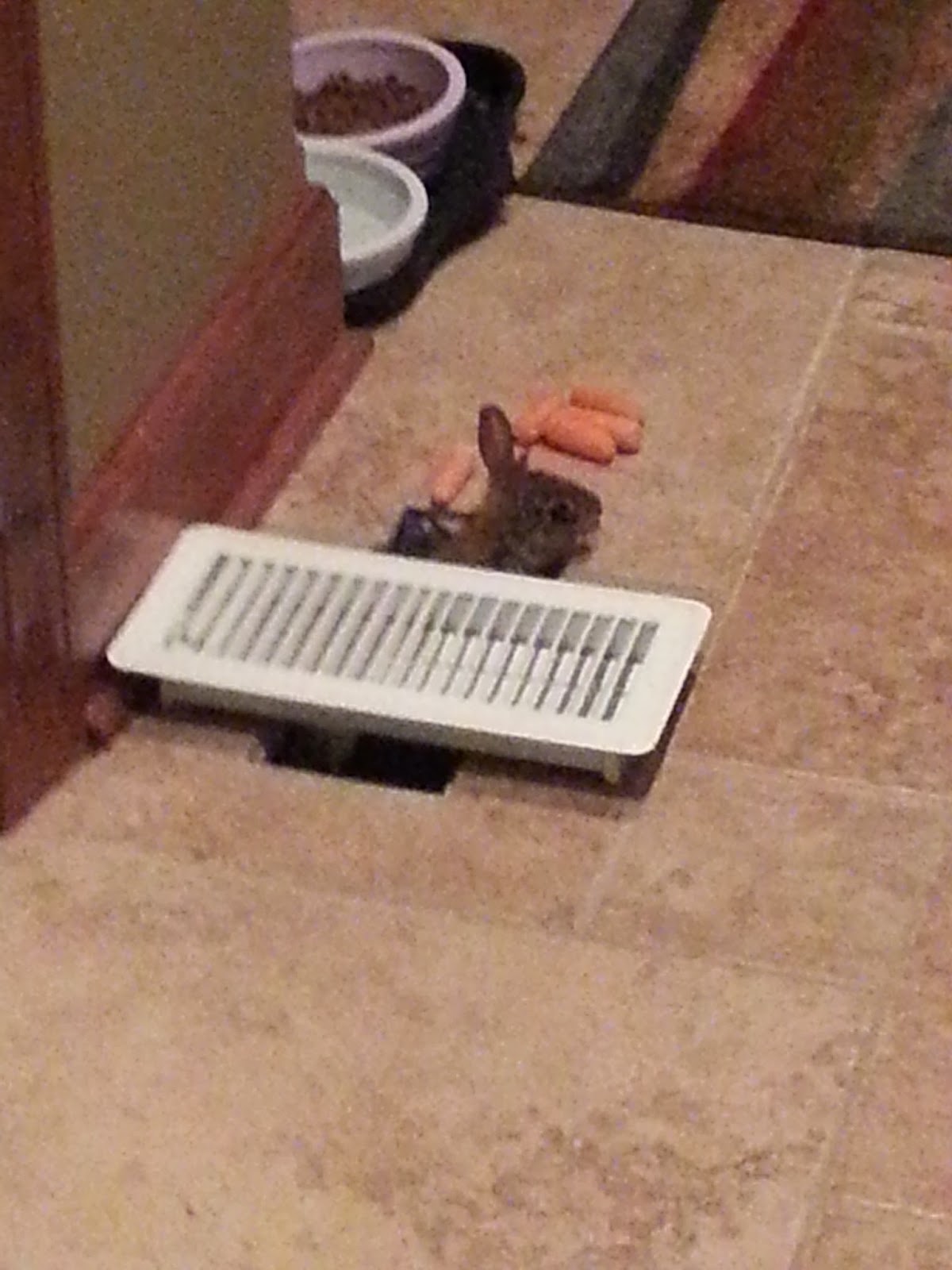 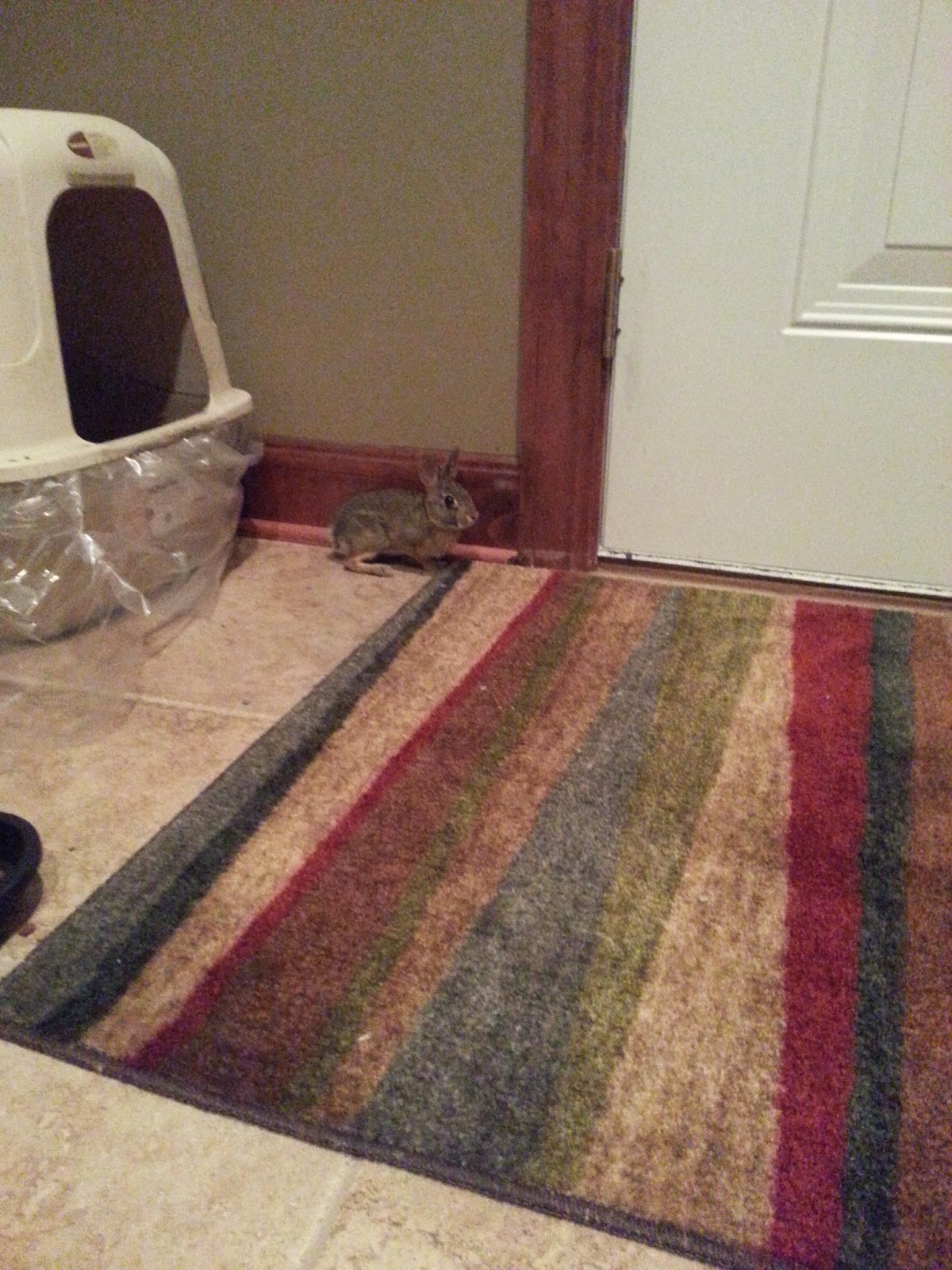 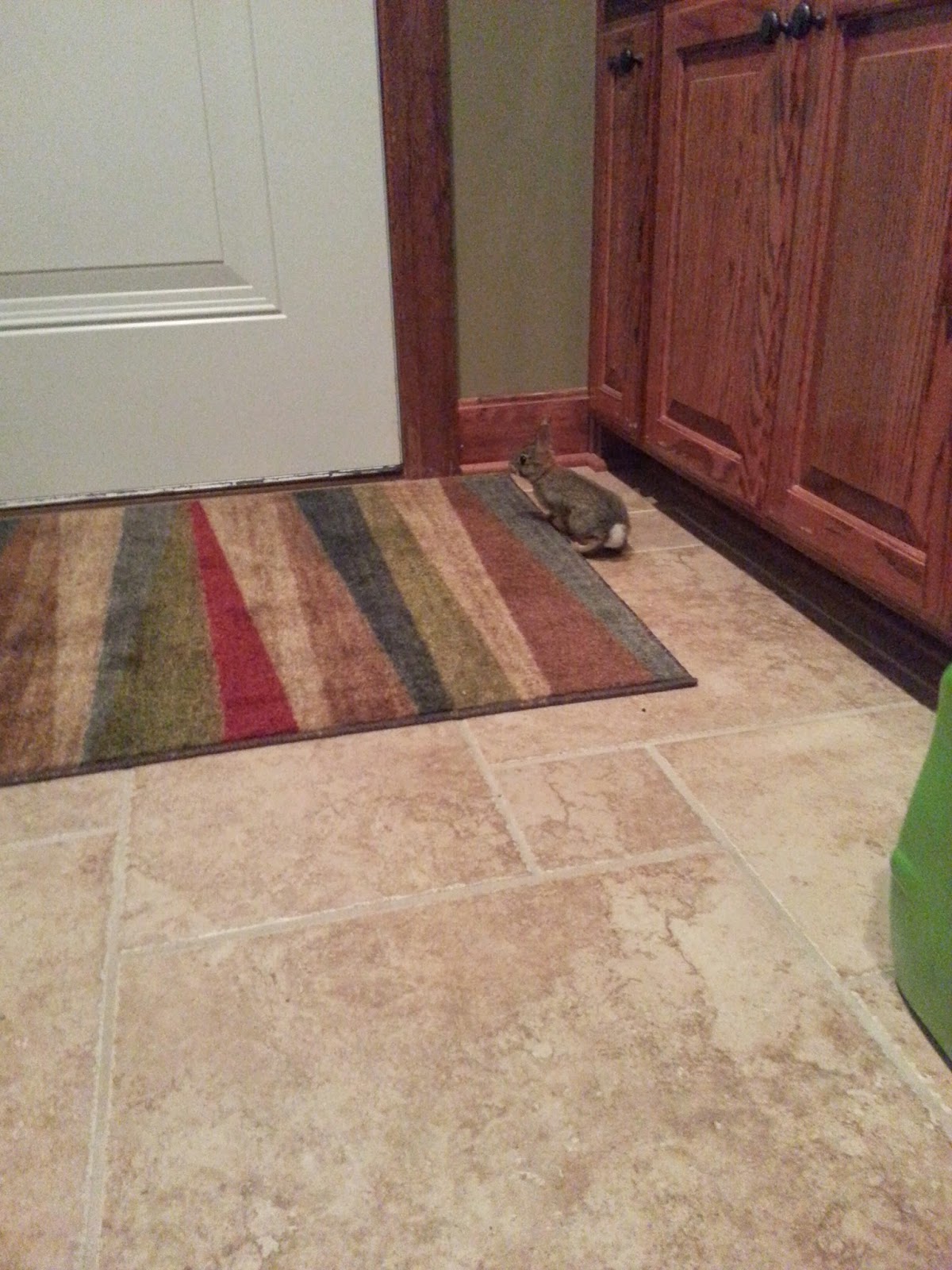 At which point I replaced the vent cover and called the Almost Third Grader upstairs.  He came in quietly and sat down by the dryer to help block Fluffy-buns from running behind the appliances. 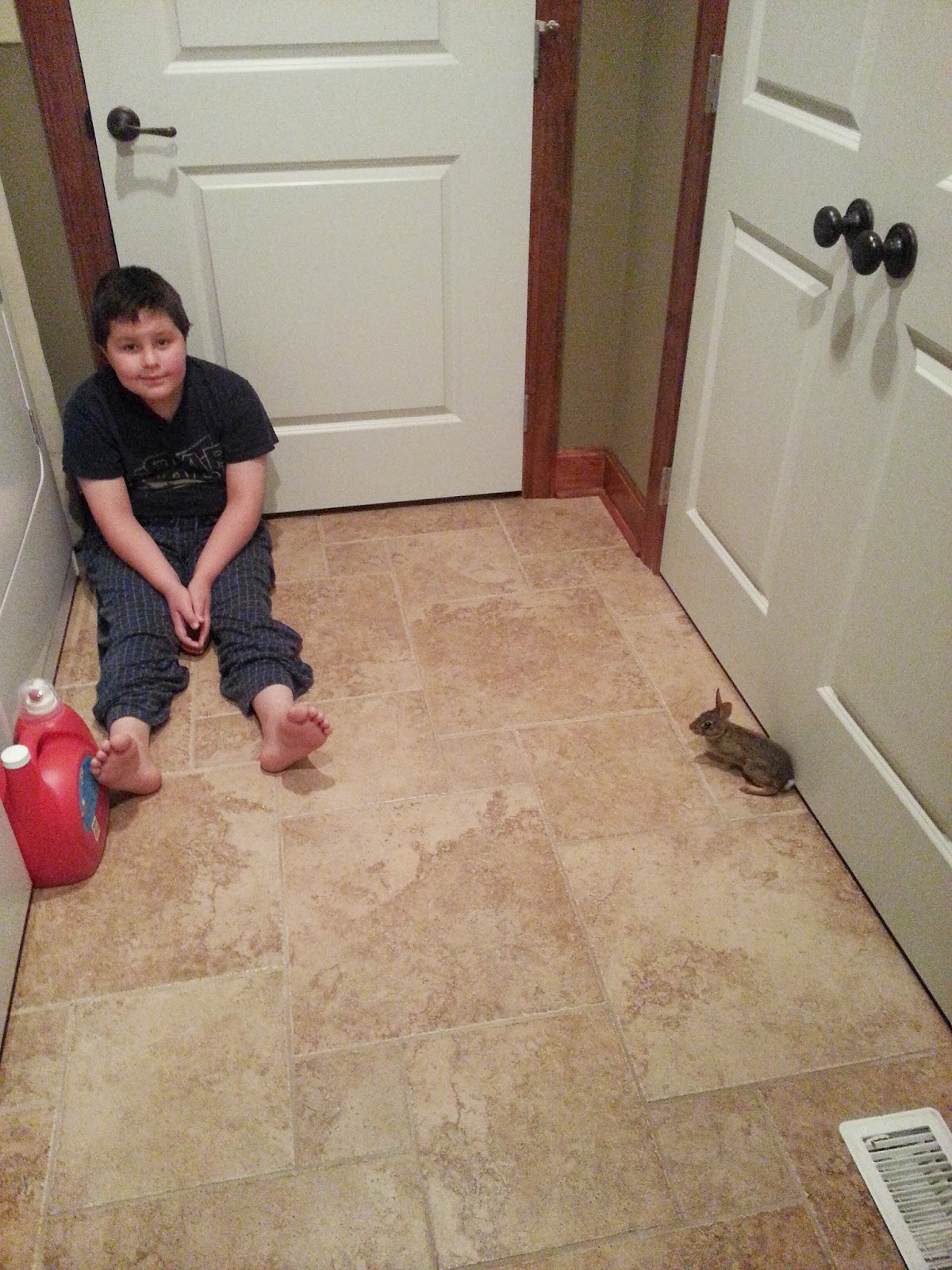 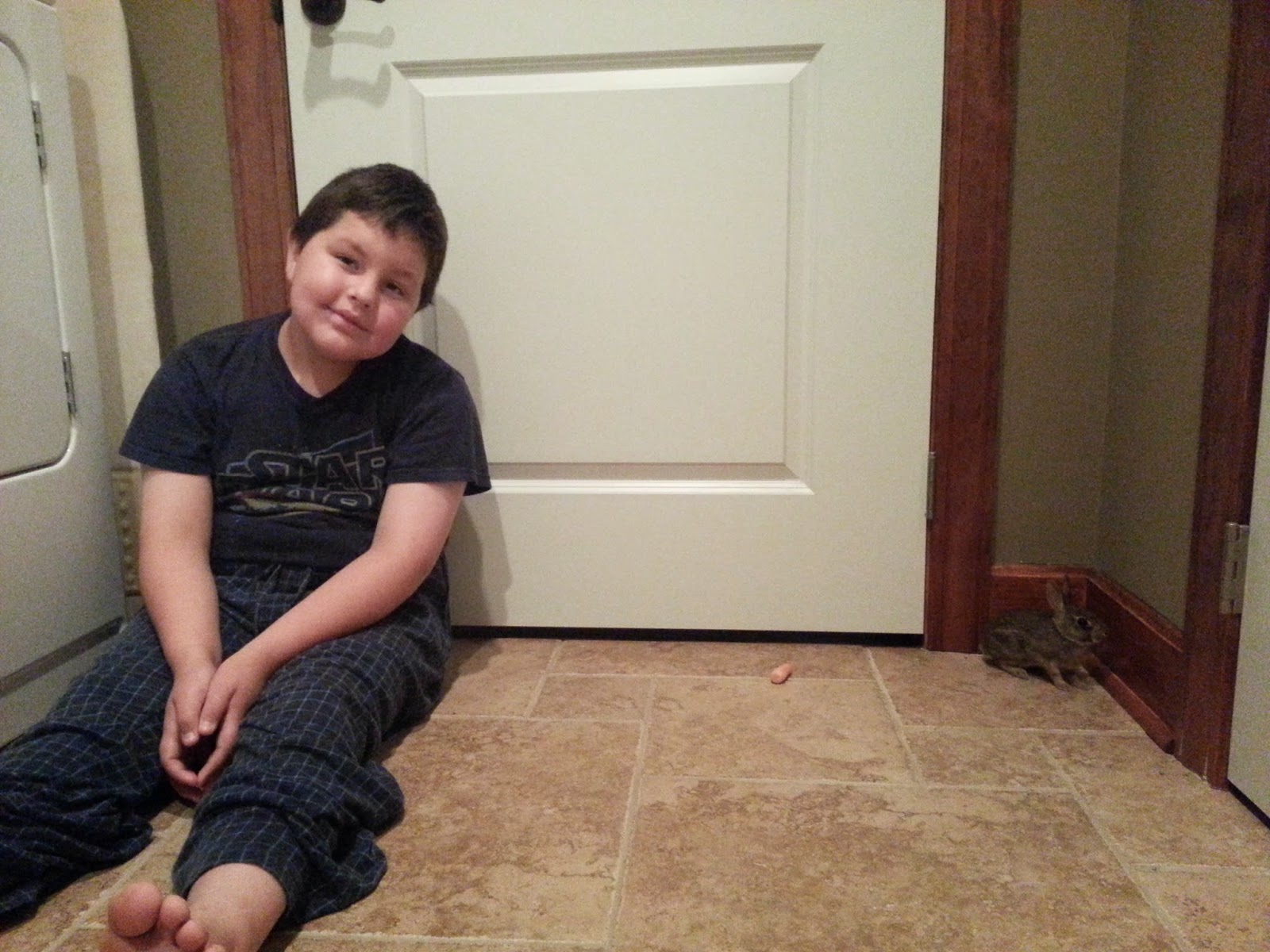 Though a surprise, Fluffy-buns' visit was a great opportunity for us to observe up close a creature with whom we share our property, since we usually see him (her?) outdoors in or near our garden. 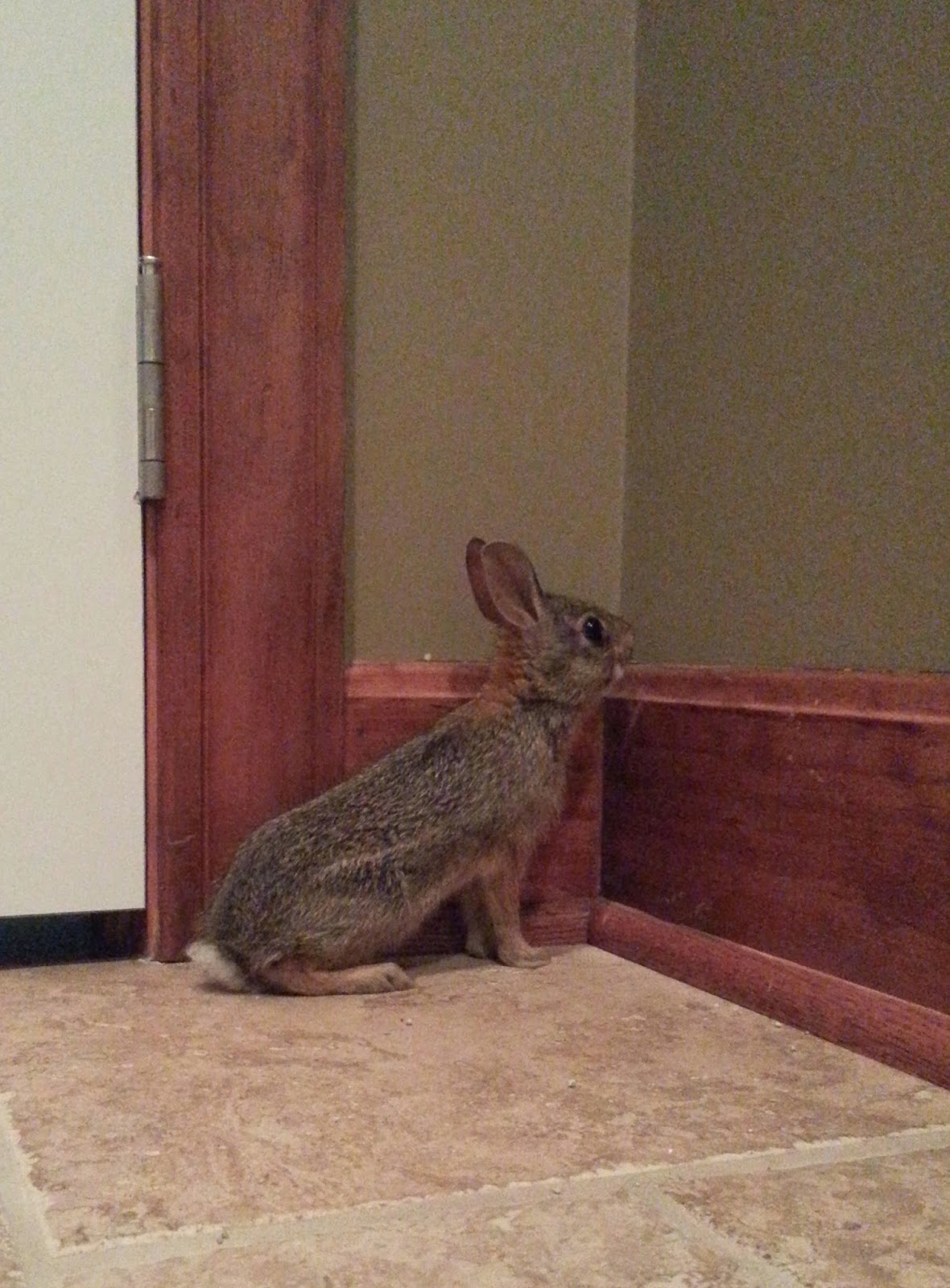 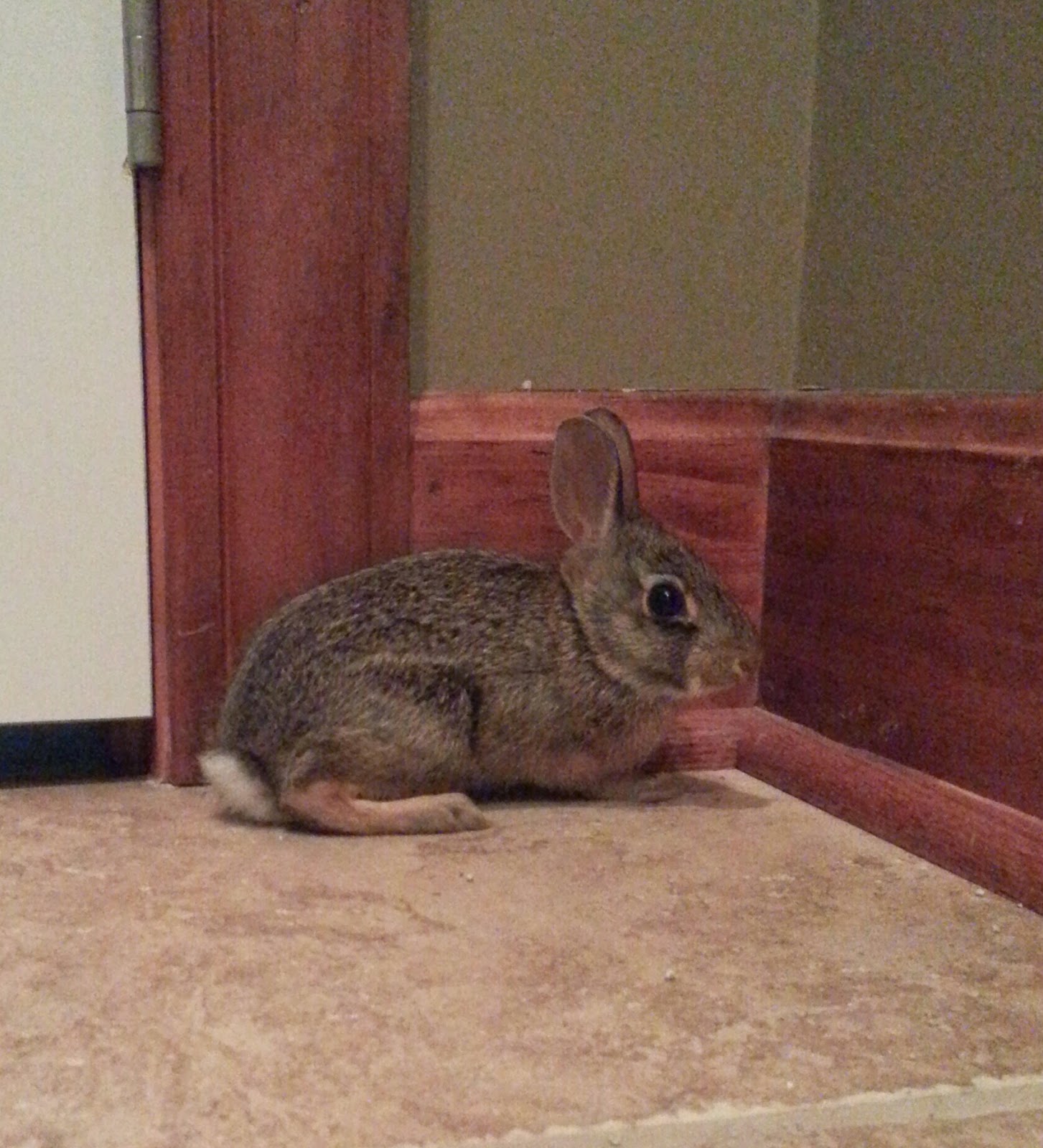 We have two cats, so Fluffy-buns needed to return to the great outdoors.

Tossing a towel over him and then scooping him up, I carried him outside to the front lawn, accompanied by the Almost Third Grader.  After a quick petting on the head, we let Fluffy-buns free...

... and then ~quickly~ closed the garage door.

You see, Fluffy-buns ran INTO the garage yesterday morning, after Dear Husband left it open while he used the weed trimmer around the property.  Thinking that the bunny had eventually snuck back outside, we went on about our day and evening.

Soaking in the tub after dinner, I heard a horrible racket, like metal on metal, coming from downstairs.  I thought something had collapsed or that DH had dropped metal of some sort.  I quickly wrapped a towel around myself and went to see what was wrong.  Nothing, apparently.

After a good night's sleep, we had coffee, watched some news, and had breakfast before he left for work.  Not long after, I heard more banging, and thought the Almost Third Grader was downstairs getting into something.  When he came upstairs and asked ~me~ what ~I~ was doing, we knew something unusual was happening.

Coming from the laundry room.

And that's when we saw the ears, which started this morning's adventure.

Dear Husband has identified that there's an open air vent behind one of his tool boxes in the garage.

An air vent that he will be placing wire mesh over immediately, oh yes.

Posted by Michaele Sommerville at 10:22 AM